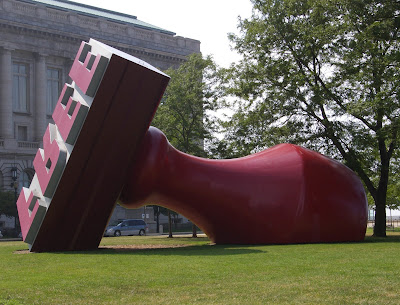 Poor Free Stamp; shunned by the company that initially commissioned the work, and almost destroyed because of a closed-minded member of Cleveland City Council, it’s as if no one wanted it. But, it’s always been a favorite of mine because it’s big, it’s bold, and it’s a survivor.

For those of you not familiar with Free Stamp, it is a large sculpture, designed by Claes Oldenburg and Coosje Van Bruggen, of a giant rubber stamp with the word “FREE” (backwards) on it. Oldenburg and Van Bruggen are well known for their sculptures of common items done to giant proportions. (Check out their web site for some examples of their work, here.)

Free Stamp’s problems had nothing to do with the quality of the work. The problem was with the interpretation of the work by a large corporation and local bureaucrats, and the sculpture’s battle to find a home where its art could be appreciated.

Here’s the story. In the early 1980s, Cleveland’s Standard Oil Corporation (SOHIO) was given the approval to demolish the old Standard Oil of Ohio building on Public Square. The company wanted a work of art outside its front doors, which is right across from one of the City’s historic landmarks, the Soldiers and Sailors Monument. Upon seeing the area with which they had to work, and considering the style of their art, Oldenburg and van Bruggen suggested creating an enormous stamp. The current design of the stamp is not what they originally proposed, which was an upright, self-inking stamp, with a red handle, large enough that people could actually walk inside the stamp. SOHIO nixed the idea citing high maintenance, so the design was retooled to look like a hand stamp on an inkpad.

Of course, the next question was what words to have on the stamp. The artists thought of something that would make a statement, yet also be something that may realistically found on a rubber stamp. Since there were space constraints as to what word could properly fit, Van Bruggen suggested the word “Free,” which would represent liberty, independence (a reflection of American ideals) and to make a positive statement in the center of the Public Square of the city.

But, nothing here ever goes without a hitch. As construction on this new design began, SOHIO underwent a management change as British Petroleum assumed increased control of the company. New management didn’t like having pop-art at their front door, much less one that had the word “FREE” emblazoned on it. (Like we would think petroleum products would ever be free or we would never be free of them?) Then, when the artists were given the opportunity to relocate the stamp, they balked, and work on the Stamp was halted for several years and pieces of it were placed in storage.

Later, when BP management questioned why the company was paying so much to store a huge stamp, interest in Free Stamp resurfaced. Mayor George Voinovich invited Oldenburg and van Bruggen to Cleveland in hopes of selecting another site.

According to the City of Cleveland’s web site,

“Although the Cleveland Museum of Art was considered, the artists wanted their work to be seen in the heart of Downtown and set their sights on Willard Park for its proximity to Public Square and because of its location to Cleveland’s government offices.

Placing the Free Stamp in Willard Park immediately drew opposition from Council President, George Forbes, who did not support the idea of the City of Cleveland accepting a rejected work of art and displaying it right outside of City Hall. Once again, the artists had chosen their location as part of their artistic statement and were unwilling to compromise their artistic integrity. This time, they threatened to destroy the work entirely if the City did not want to display it.

Before the artists could act on their threat, Election Day 1989 had passed and newly elected Mayor, Michael R. White, and Council President, Jay Westbrook, expressed their interest in this unique work. BP America finally decided that it would donate the Free Stamp as a gift to the City and offered to maintain it in its new location. City Council accepted this generous gift and the Free Stamp was brought out of storage and redesigned to accommodate its new space.

The lawn at Willard Park inspired Oldenburg and van Bruggen to alter the position of the Free Stamp so that it would lie on its side, as if it had toppled over on someone’s desk. Van Bruggen felt that the new design reflected the Free Stamp’s history as it was “flung” from Public Square only to “land” in Willard Park. Production on the Free Stamp resumed and it was brought to Cleveland in pieces to be assembled in its current spot.

And today it is still there, sitting proudly in Willard Park. Sometimes in the summer you can see kids climbing on it, and often it's being photographed. It may not be a huge icon for the City of Cleveland, but it does serve as a great reminder that we are indeed, FREE.
Free Stamp - Aerial Views 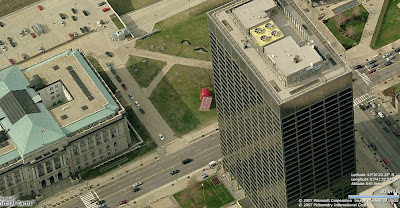 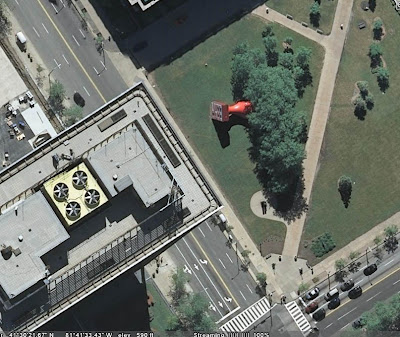 Check out my blog home page for the latest Cleveland information, here!
Posted by All Things Cleveland at 1:38 PM

I want to find a small replica of this to have at home. Were would i go to find it?

Try an office supply store. Someone is bound to still have some rubber stamps or be able to make one for you. :)

Did the Free Stamp ever sit next to the BP building? Any pictures?
Thanks.

I don't believe it was ever placed outside the building as the BP people did not like the idea of it sitting right outside their front door. It sat in storage for a while until it got to its current Willard Park location.

what was used to make the sculpture, please can you tell me i need to know for homework, thank you

The answer is in the article above but you have to click on the artist's web site to see it. Here's the link again:

Scroll through their works to find Free Stamp on their site and you'll get your answer.

this was very helpful, dankyou

Thank you! Was passing through Cleveland and came upon this so had to find out it’s history. Interesting!