I was in an artistic mood today while I was going through some pictures of Cleveland that I look this past July. Some pictures looked rather boring, I admit. But I found one that I took in the Settler’s Landing area that had promise. Settler's Landing is on the shore of the Cuyahoga River where Moses Cleaveland arrived on July 22, 1796. There is a small park at this location, along with an RTA (light rail) station

My photograph was taken looking south toward the Detroit Superior Bridge (AKA the Veterans Memorial Bridge). It looks plain and generic in its original form, so with one quick color enhancement, a more interesting view of the landscape and sky appears.

Settler’s Landing can be found on the banks of the Cuyahoga River, on Old River Road, west of the Terminal Tower and Tower City. 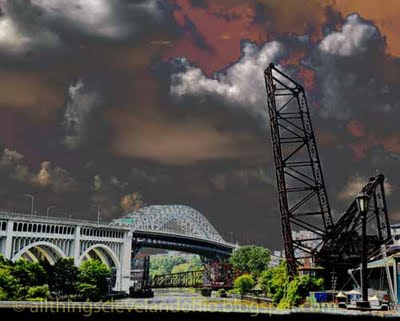 “Kill The Irishman” A Movie About Cleveland Mobster Danny Greene

I’ve lived in the Cleveland area all my life, and one thing that long time Clevelanders know is that this city used to be a hotbed of crime. (It may still seem that way, with all the corruption in county government these days.) I went to school (Catholic school, by the way) with some of the grandchildren of some of the most notorious criminal Italian family names in the city. One student in high school frequently bragged that her grandfather was in the Mafia; one boy in grade school was aware of his family’s mob connection but was ashamed of it. My husband – as a young boy and with his mom’s permission - got to ride in a limo with a man who turned out to be a notorious crime figure as this man went to the bank to deposit money. (I often wondered if it was mob money this person was depositing?) For many years, it was very hard for someone in the city not to know someone connected with the mob because their children and grandchildren were part of the community.

Danny Greene, one of the big names in crime in the city, was not Italian, but he was Irish-American. According to the Wikipedia entry about Danny Greene:

The Cleveland family boss, Frank "Little Frank" Brancato, brought in Greene and other gangsters of Irish heritage to act as errand boys and muscle to enforce the Mafia’s influence during the 1960s. Greene was used as muscle in enforcing the Mob’s control over the garbage hauling contracts and other Mob influenced rackets. This was a move Brancato would later grow to regret. Until his death in 1973, he regretted bringing Danny Greene into the Mob and the damage it did.

Greene went on to fuel a mob war, which caused a flurry of killings and car bombs, so much that Cleveland earned the name Bomb City USA.” Fittingly, Danny Greene was killed by a car bomb when he went to a dental appointment at a medical building in Lyndhurst, Ohio, right off of I-271, near upscale communities and office complexes. It’s not a place one would ever expect such a violent act.

Now Danny Greene will be immortalized in a new film titled "Kill The Irishman" (orginally named “The Irishman”) which is scheduled for release in 2011. It will star Ray Stevenson as Danny Greene, Vincent D’Onofrio as John Nardi, Robert Davi as Ray Ferrito, and Tony LoBianco as John Licavoli. It will also star Christopher Walken and Val Kilmer. In a weird twist, the film is not being filmed in Cleveland, likely due to the fact that Governor Strickland vetoed a bill to give tax breaks to film makers. A travesty, I say. The film is currently being shot in Detroit. (The only worse insult is if it were filmed in Pittsburgh.) Of course, right now Detroit looks more like Cleveland in the 1970s than Cleveland does at the present time.

Movieset.com describes the film as follows:

I will definitely be watching this movie closely, but I will also be watching for accuracy. In 1989 I read a book called “Mobbed Up” the story of another notorious local figure Jackie Presser. I believe this book was made into a movie in the early 1990s, and if I recall correctly, the movie depicted Danny Greene being killed by a car bomb in a narrow alley. Well, I am very familiar with the location where Danny Green was killed, as I drove past it on the way to work each day in the mid-1970s and also worked only a few miles away from it in the high-rent office district of Landerhaven for a few years in the late 1990s. The parking lot where Danny Green was killed is far from a narrow alley. So if the filmmakers get this aspect of the film right, they will get my respect. But, if the picture here (a still from the filming) is of the car bomb that actually got Danny Greene, they got it wrong.

“Kill The Irishman” sounds like an interesting movie, if you have lived during those years of crime in Cleveland or not. You can follow the film’s progress at Movieset.com


Update March 6, 2011: "Kill The Irishman" is scheduled for limited release as follows:

As a continuation of my blog from last week about ”Justice”, the stained glass window in the Cuyahoga County Courthouse in downtown Cleveland, I thought I would feature the large murals that are on the second floor flanking each side of the large center hall of the Courthouse.

The mural on the north side of the second floor is “The Constitutional Convention, September 17, 1787” and was painted by Violet Oakley in 1915. It is a rendering of the final moment on the last day of the convention, held in Philadelphia, PA. George Washington is on the left side of the mural and he is presiding over the convention. Benjamin Franklin is on the right of the mural. As Franklin was too weak to speak, he is shown handing his speech to fellow Pennsylvanian James Wilson to read. The US Constitution was adopted on this day.

The second mural on the south side of the second floor is “King John Signing the Magna Carta at Runnymede, 1215” painted by Sir Frank Brangwyn in 1913. It depicts the King signing the document that proclaimed certain rights of the King’s subjects, whether they were free or not free. The Magna Carta was likely the key influence on what led to the rule of constitutional law that we know today. It was the first document forced onto an English King by a group of his subjects to limit his powers by law, and protect their privileges.

Here are a few photos of both of these beautiful murals and the surrounding area. 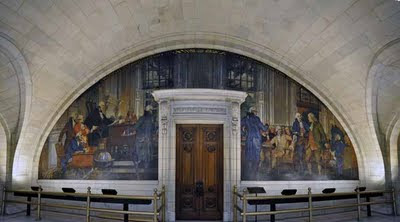 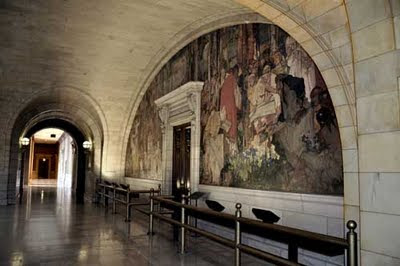 View of the Magna Carta mural from across the center hall 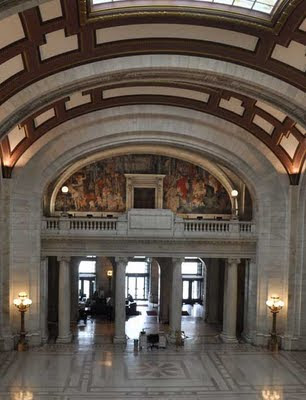 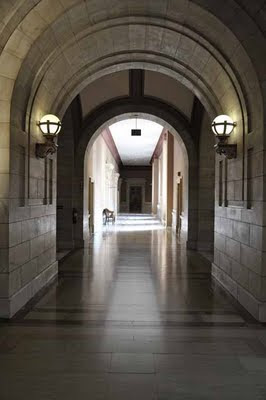 I don't know where the doorways next to the murals lead, but one of the doors reminds me of the face of a lion. 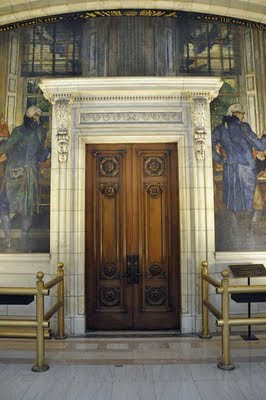 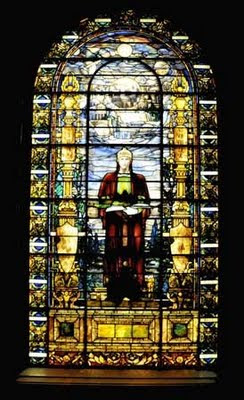 "Justice" Stained Glass Window
Cleveland's Cuyahoga County Courthouse
One of the most stunning sights in the Cuyahoga County Courthouse in downtown Cleveland is the large stained glass window titled “Justice” which is at the landing of the large marble staircase at the east side of the main lobby. The window was designed by Frederick Wilson of Tiffany Studios and Cleveland architect Charles F. Schweinfurth. The work was executed by the Gorham Glass Works of New York City

According to “The Cuyahoga County Courthouse Crown Jewel of the Group Plan” , “Justice” is depicted with her eyes uncovered, indicating justice should not be blind, and her eyes should be “open to the spirit and to the letter of the law.” The right hand of “Justice” is covered in mail and her left hand is bare to symbolize the dispensation of justice tempered with mercy. Tablets representing the Ten Commandments are on each side of the standing figure, and overhead is the “celestial city of the Apocalypse where perfect justice reigns.” Sounds very serious to me, but I am more enamored with the beauty of the colors of the glass and the workmanship, not to mention the curved marble staircase which rises on each side of the window.

If you are in the vicinity of the Cuyahoga County Courthouse , located on One Lakeside Avenue, stop in and take in the beauty of this lovely stained glass window. It’s one of the hidden gems of Cleveland that is not to be missed. 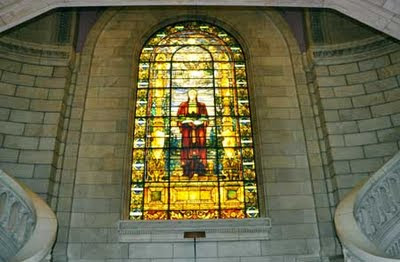 View of window from base of stairway 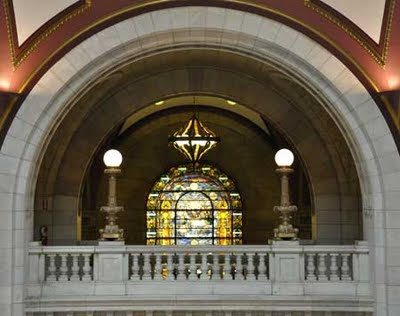 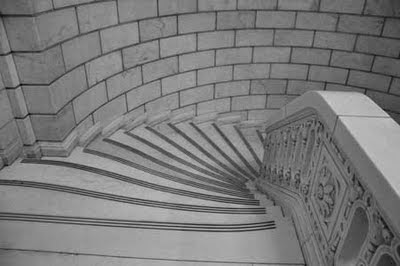 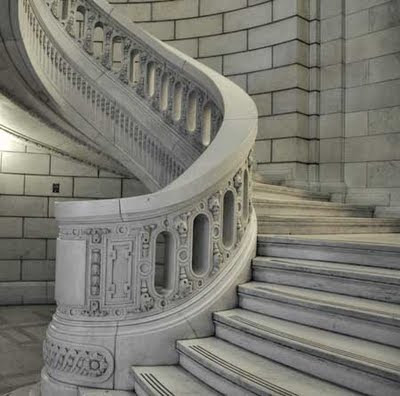 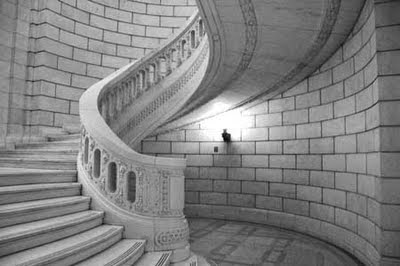 Marble staircase, multiple views up and down (B&W photos) 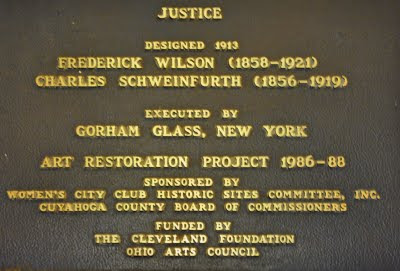 The plaque at the base of the window

Close up of "Justice" 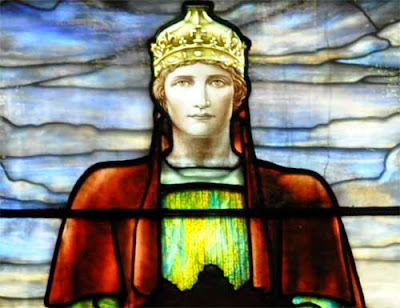 Close up of the face of "Justice"

Email ThisBlogThis!Share to TwitterShare to FacebookShare to Pinterest
Labels: Cuyahoga County Courthouse, Justice
Newer Posts Older Posts Home
Subscribe to: Posts (Atom)
All content (including commentary, photos/images) © allthingsclevelandohio.blogspot.com unless otherwise noted. No content on this site may be reproduced, distributed, or otherwise used without prior written permission from allthingsclevelandohio.blogspot.com