Every now and then, some kind person uploads a gem to YouTube. Here’s one for long time Cleveland residents: a short film, shown below, called “Brooklyn Goes To Cleveland.” It is part of a series of short films done by Arthur Cohen, who may be better known under his stage name, Phil Foster. His character, named “Brooklyn”, was featured in many short films or travelogues to cities such as San Francisco, Paris, Detroit, Las Vegas, Rome, etc. Brooklyn sometimes made sarcastic, humorous comments about what he saw, no matter what city he visited. He didn’t spare Cleveland. This film was released in 1955.

A little bit of trivia: Cohen also directed a film called “The Pied Piper of Cleveland: A Day in the Life of a Famous Disc Jockey” , which was a documentary on the career of Cleveland disc jockey Bill Randle. The film included Elvis Presley's first appearance on film, taken from a live performance at Brooklyn (Ohio) High School. As there were legal problems over the ownership of the film, it only had one public showing, and still has not been officially released. Some sources report that it is sitting in a vault at Universal Studios, others saying the film no longer exists. Maybe someone from the Rock & Roll Hall of Fame can get this film located and/or resurrected?


Here’s the short film “Brooklyn Goes To Cleveland.” The quality isn’t too great but the audio is fine.

Check out my blog home page for the latest Cleveland information, here.
Posted by All Things Cleveland at 11:05 AM 1 comment:

If you live in or around the city of Cleveland, or if you are just visiting, the web site CityProwl will help enrich your visit. CityProwl provides walking tours of many of the key points of interest in downtown Cleveland, including interactive and downloadable maps, and MP3 downloads of the tours to guide you through your walk. While you can access all this information on your computer, you can also download the audio tour to an MP3 player so you can take it with you. By beginning at the designated start point, you can follow the audio instructions that take you through the tour and the sights.

CityProwl is a great tool for visitors, and can even benefit residents of the Cleveland metropolitan area who just want to rediscover the city.

So next time you’re looking for something to do, how about taking a walking tour of downtown Cleveland? Stop by CityProwl.com before you head off – it will make your trip much more worthwhile!


Check out my blog home page for the latest Cleveland information,
here.
Posted by All Things Cleveland at 8:29 AM No comments:

You Know You’re A Clevelander When…

Every now and then, someone circulates an email that starts with, “You know you’re from Cleveland when…” It lists a lot of questions involving snow, cold, winter, lake effect, polkas, kielbasa, beer, pop, sports, rock & roll, the Cuyahoga River, East side vs. West side, potholes, and orange barrels. I think those categories cover just about all the key points of which any self-respecting Clevelander should be fully aware.

This video short from Positively Cleveland features its own list of topics covering how to know if you’re a Clevelander. Take a look and see if you fit the bill. PS – if you have to ask what "kielbasa" is (mentioned above), you can't possibly be a Clevelander. If you know what it is but you’ve never eaten it, you don’t deserve to be a Clevelander even if you do live here!


You Know You’re A Clevelander When...

Check out my blog home page for the latest Cleveland information,
here.
Posted by All Things Cleveland at 2:48 PM No comments:

Email ThisBlogThis!Share to TwitterShare to FacebookShare to Pinterest
Labels: Cleveland

In the past, I’ve rated Cleveland’s morning news shows, weather forecasters, and the stations’ web sites. But it’s time to get down to business and talk about the best news anchors in town. It’s a short list, divided mostly between two stations, WKYC Channel 3, and WJW Fox 8. Viewers may think that news anchors are only as good as the copy they are given and their ability to read a teleprompter, but it is more that that. There has to be a certain “something” that an anchor has in order to keep viewers tuned in. After all, the news content is the virtually the same for every channel.

I started writing this blog yesterday – in my head – as I was tuned in to the 6:00 PM news, watching Romona Robinson. I found myself wondering what must be going through her head, sitting up there doing the news all by herself, since Tim White left the station. In fact, it stuck in my mind so much I had a dream last night that Romona was complaining to me that she was worried she wasn’t doing very well. I’m here to tell her, and all my other readers, that Romona is doing a great job sitting in the big chair all by herself. Frankly, while I enjoyed Tim White, I always felt that Romona was the star of this newscast.

Romona delivers the news in a very deliberate, no-nonsense way. She maintains a professional demeanor, and even when a humorous moment breaks out, she still maintains her poise. But for the most part, Romona is all business while she is delivering the news, and her steady style can be calming even when the news isn’t all that good. She also isn’t one prone to overly editorialize about the news she’s delivering, a habit of which many other anchors suffer. When I turn on the evening newscasts, I want the news and I want it quick and to the point, and Romona fits that bill perfectly. While I do not know Romona, she seems to be a class act. And that’s the kind of personality a station should want in the anchor chair. 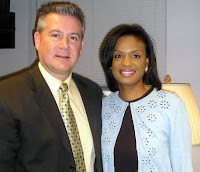 Bill Martin and Stacy Bell may actually have the best chemistry of any anchor team in town. They deliver the news in a crisp, yet light manner. Their best trait as team is their witty dialog between stories, with Stacy often looking at Bill with half condescension and the other half disdain, while Bill looks back at Stacy like she’s got a few screws loose. It’s almost like a married couple. But they know when it’s right to be serious and when it’s OK to take a jab at each other. Why didn’t I make them #1? It’s because viewers can’t always rely on one or both of them to be doing the news when they tune in to watch. It’s so bad that Bill Martin is often ribbed on-air by his co-anchors and letters from fans about his frequent absences. Of course, Stacy has missed her share of time as well. At first blush it sounds funny, but trust me, it really does annoy the viewers when they turn on their news and get stand-ins more than they get the leads. Still, when Bill and Stacy are both on the air, viewers are guaranteed a good dose of the news with some entertaining levity mixed in. It's a real treat.

Despite the fact that they make sure that their on-air clothing matches each other, one may think that this is the biggest mismatch of anchors in town. Wayne Dawson sometimes seems too stuffy and Tracy McCool sometimes seems a little too cheerful. But, over the years, this has formed a perfect balance for the delivery of the morning news, with a fast pace that gets you up and gets you going. They seem very comfortable working together, and that can make even the most hurried morning rush seem a little more calming. Some of their best moments, though, are unscripted and impromptu. For example, in a perfect example of teamwork, in this video below, Wayne steps in to save the day when Tracy loses her “McCool” while reading a news story that is too funny for her to handle.

Tracy Loses her McCool On Air

Mark Nolan took over the morning anchor desk at WKYC Channel 3 a little over a year ago. The role fits him well, much better than his previous role of forecasting weather, where it seemed he couldn’t wait to be done with his segment. But Mark seems quite at ease having to sit still for a few hours weekday mornings to do the news segment from 5:00 – 7:00 AM, and he brought the spark back and some needed energy to the morning news on Channel 3. His co-anchor Abby Hamm, however, still seems a little stiff and isn’t quite the right balance for Nolan to make this a real winning team.

Ted Henry has been on Cleveland TV news almost forever. Based on information from the WEWS web site , he’s been at the station over 36 years. Herein lies the problem. Ted has been around so long that he blends into the woodwork. It could be that he’s taken for granted, both by the stations and the Cleveland viewers. Still, Ted’s delivery of the news is reliable and comfortable. But the excitement of the Ted Henry/Dave Patterson days (video below) are long gone.

Missing in Action
Channel 19 has no standouts in the anchor category. The big problem is the tabloid style reporting of the station, which sucks any credibility out of any news stories they present. Even Walter Cronkite sitting at the anchor desk couldn’t be considered a contender.

Check out my blog home page for the latest Cleveland information, here.
Posted by All Things Cleveland at 2:22 PM 10 comments:


Somewhat by accident I found that only a few hundred feet from a company where I used to work in Eastlake Ohio, there was a Nike Missile site. No, I’m not talking about a type of shoe, but real honest-to-god missiles that are used for war and blow things up. I became curious about the subject and with a little digging, I found that at one time, there were several Nike missile sites in the Cleveland area. 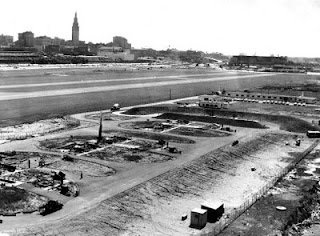 The Nike missile program was named after Nike, the goddess of victory from Greek mythology. The program brought Nike Ajax and/or Nike Hercules missiles to the Cleveland area and other locations across the nation during the “Cold War” era to combat a perceived Soviet threat. The missiles were part of a “line-of-sight” anti-aircraft missile system. They were put in place in the mid-1950s, and remained in place until the early 1960s when most locations in the Cleveland area became obsolete and closed, with the exception of the Parma and Warrensville locations. All bases in the Cleveland area were closed by 1971, and all locations were eventually reconfigured to serve other purposes more useful to their communities. 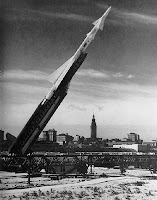 You can find more detailed information about the program, and these Cleveland locations, in the links below.

By the way, I dug deep into my “archives” and found some old aerial photographs taken of the company where I worked in Eastlake. The photos were from the early 1960s – long before I worked there – but you can spot the location of the missile site in the photos. 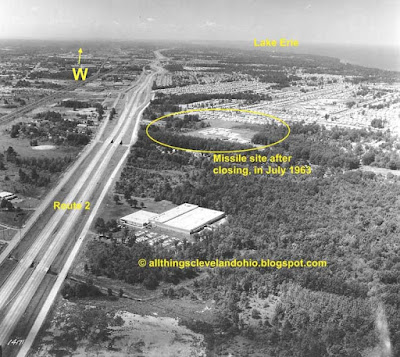 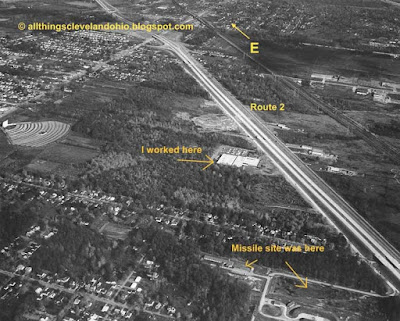 Check out my blog home page for the latest Cleveland information, here.
Posted by All Things Cleveland at 2:21 PM 19 comments:

Email ThisBlogThis!Share to TwitterShare to FacebookShare to Pinterest
Labels: Cleveland, Nike Missile Sites
Newer Posts Older Posts Home
Subscribe to: Posts (Atom)
All content (including commentary, photos/images) © allthingsclevelandohio.blogspot.com unless otherwise noted. No content on this site may be reproduced, distributed, or otherwise used without prior written permission from allthingsclevelandohio.blogspot.com