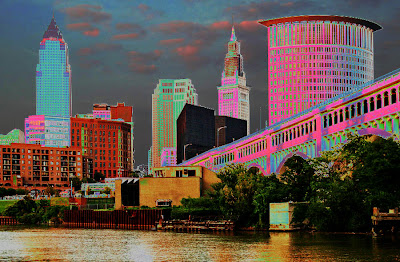 Bizjournals.com recently published their list of the 50 most stressful metropolitan areas in the United States, where Cleveland came in second with a 6.53 stress index. Detroit claimed the top spot with a 10.64 stress index. Bizjournals.com says about Cleveland, “Right behind Detroit on the stress index is another Great Lakes metro with its share of economic woes, Cleveland. It's burdened with the group's worst robbery rate, second-worst frequency of heart attacks and strokes, and fourth-worst unemployment rate.”

I always cringe at these kinds of reports, because I think they are representative of a bunch of number-crunchers collecting data and making the numbers say whatever they want, by either including or excluding certain elements. (The list their methodology in tabulating the data here.)

It also doesn’t take a rocket scientist to determine that it would be less stressful living in a vacation destination like Virginia Beach (the least stressful metro area on their list) than it would in Detroit.

I take exception with the assumption that all the elements that they measure add up to a stressful metro area. Isn’t that a little presumptuous of them? Only one of those categories could be a deal breaker for some. For example, anyone who has driven on I-90 through Gary, Indiana (I suppose considered part of the Chicago metro area for their study) would believe Gary has got to be the most stressful area for people just VISITING the area, forget the residents. (Although I am sure those traffic jams have caused severe stress for Gary residents too.) I never spent more time in traffic than I did in a short 2 mile stretch in Gary a few years ago. It took over an hour and thirty minutes to go 2 miles, it wasn’t rush hour, it was a clear, sunny, summer day, and there were no accidents. I though the car and truck fumes alone would kill me. Maybe all those circulatory deaths in Cleveland are from residents who have had the misfortune of driving through Gary, or other cities like New York or Los Angeles? One of those alone would bring me to the brink of a heart attack.

So let’s get some perspective on this and take a look at Bizjournals.com’s data, and list the worst three metro areas from each of their categories, with their respective percentages/numbers:


So there you have it. Cleveland only makes the appearance in the top three of two - out of ten - categories. Still not something to be proud of, but I’d rather live here than in San Bernardino, where I wouldn’t be able to breathe OR get a job. In fact, California as a whole looks pretty stressful to me.

For those of us living in the Cleveland metro area, we know that while life does have stresses, things could be a lot worse. Stress can come from a lot of places, many not even on Bizjournal.com's list. On the plus side, the Cleveland metro area has a lot to offer, things like fresh water, a temperate climate, great food, museums and other cultural attractions, pro sports teams, a great parks system, nice people, and some of the best medical care in the world, just to name a few.

So, Bizjournals.com, you can take your survey and stick it where the sun doesn’t shine – which looks like Pittsburgh, Seattle, or Buffalo.


Check out my blog home page for the latest Cleveland information,
here!
Posted by All Things Cleveland at 7:35 AM