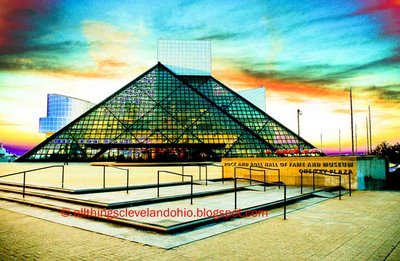 In December 2007 I did a feature here on the Rock & Roll Hall of Fame and Museum. At the time of that writing, I bemoaned the lack of respect that the R&RHOF received, complaining that the induction ceremonies are held in New York City. Just four days after I aired my complaint, it was announced that the induction ceremonies would be held in Cleveland in 2009. Of course I had nothing to do with that, but it still felt like someone heard me.

It’s hard to believe, but the date for the Cleveland, Ohio induction ceremony is upon us. The Rock & Roll Hall Of Fame induction ceremony is scheduled to take place on April 4, 2009, the first time it’s been held in Cleveland since 1997. And, so everyone across the United States can enjoy the event, it will be broadcast live on Fuse TV.

Rock Hall induction week, which begins on March 26, includes many added events such as educational programs, concerts, parties, The Moondog Coronation Ball, and much more. There will also be a “Free Day” giving free admission to the Rock & Roll Hall Of Fame and Museum for the public.

To get everyone charged up, here are a few videos from the Rock Hall that explains its history, how it helps the city, and provides a view into the facility itself. For further information about the R&RHOF and the upcoming induction ceremony, visit Rock & Roll Hall Of Fame and Museum web site.


Economic Impact of the R&RHOF


How Cleveland Built the R&RHOF

Email ThisBlogThis!Share to TwitterShare to FacebookShare to Pinterest
Labels: Cleveland, Rock and Roll Hall of Fame